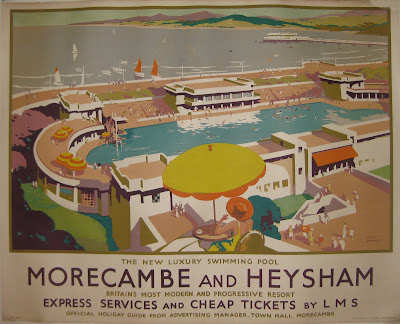 My name is Frances Castle and I run Clay Pipe Music the small label that is releasing Lido on CD. I started Clay Pipe initially to put out some of my own music - and this quickly led on to releasing music by other people. Darren's CD will be the sixth on Clay Pipe. The idea is  to stay well clear of  plastic jewel cases and put out limited edition CDs in hand made covers that I design and illustrate myself. I guess the time and effort put into every release is a direct response to mp3/download culture where it seems like music and its packaging has been devalued at bit. It is also looking likely that some future releases will be on vinyl.

The music I have put out so far has largely been British atmospheric and instrumental, but the musicians have come from varied backgrounds and genres.

Get the flash player here: http://www.adobe.com/flashplayer

I wasn't sure what to write for this blog until Chris Ingham posted his poem about Ikley Lido. By chance the poster he used to illustrate it was by my grandfather Frank Sherwin who as a commercial artist in the 1930s-50s  did a huge amount of work for the railways both before and after they were nationalised. He and his contemporaries were largely responsible for promoting the image of the golden era of the British seaside holiday as we think of it today.

My Grandfather was born far from the sea in Derby in 1896, the son of Samuel Sherwin who was a Chemist by trade but also a keen amateur artist. During the first world war he served with the Honourable Artillery Company and fought in Italy. On demobilisation he studied at Heatherleys Art School in London.

I don't know how the images were commissioned though I would imagine that he went to the places in the posters and sketched from life. This is the way he usually worked, I doubt he used photographic reference.

He was a watercolour artist at heart, and I think probably saw the poster work  as purely commercial, he also did more traditional watercolours that were used as carriage prints – hung up in frames above the seats, as well as prints for Medici, and many greetings cards and book covers. In fact the work he did isn't that far off the kind of work that I do as an illustrator today. As a child I wasn't aware of all the commercial work he had done, and thought of him purely as a traditional artist. I remember him sitting at his desk skilfully moving watercolour paint across, stretched wet paper. He died in 1986 aged 90.

Lido is an instrumental album by Darren Hayman about open air Swimming Pools. This blog will feature words, pictures and sounds about Lidos by various people. The record will be released in September 2012 on vinyl by 'Where It's At Is Where You Are' records and on CD by Clay Pipe Music.

Stocks of the CD are running
low.

Rough Trade have a few copies

WIAIWYA have a few copies along with the vinyl via the 'Buy' link below.